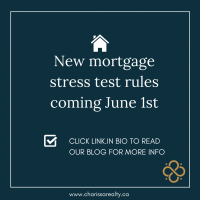 The Office of the Superintendent of Financial Institutions (OSFI) announced the minimum qualifying rate for uninsured mortgages will be the greater of the contracted rate plus 2 percent or 5.25 percent – whichever is higher. That’s up from the current qualifying rate of 4.79 percent.

OSFI says this change will reinforce the principles of sound mortgage underwriting, as the stress test aims to ensure homeowners could cope with higher payments if interest rates were to increase from their current lows.

“In a complicated and sometimes volatile housing market, the need for sound mortgage underwriting cannot be underestimated. The rate in place as of June 1, 2021 will help support financial resilience should economic circumstances change, while our commitment to review the qualifying rate at least annually will contribute to continued confidence in the Canadian financial system.”

Soon after, the Department of Finance confirmed it will follow OSFI’s lead, and apply the same higher qualifying rate to insured mortgages, or those with less than 20% down.

In both cases, borrowers will need to prove they can afford payments based on the higher of the contract rate plus 2%, or a new floor rate of 5.25%, up from the current 4.79%.

“The recent and rapid rise in housing prices is squeezing middle class Canadians across the entire country and raises concerns about the stability of the overall market,” Finance Minister Chrystia Freeland said in a statement. “The federal government will align with OSFI by establishing a new minimum qualifying rate for insured mortgages…It is vitally important that homeownership remain within reach for Canadians.”

According to Charissa Realty's calculations, a household with an annual income of $100,000 and a 20 percent down payment – with a 5 year fixed mortgage rate of 1.78 percent amortized over 30 years – would qualify for a home valued at $651,000 under today’s 4.79 percent qualifying rate.

Note: We cannot say if your prior qualified rates will applied after the new stress test comes into law, it will be at the discretion of the loan underwriters.